NEWS May 2013:
Camel back on the raod again!
They initially announced one concert, at Londons Barbican Arts Centre, on October 28. Theyll perform their third album The Snow Goose in full for the first time since 1975.

Now theyve listed a total of eight shows, five of them in the UK, all ahead of the London performance. And their official website hints there could be more in the offing.

Andrew Latimer will be joined by Colin Bass, Denis Clement, Guy LeBlanc and special guest Jan Schelhaas for the shows, their first since their farewell tour in 2003.

The band previously explained of the now sold-out London appearance: The evening pays tribute to former band member Peter Bardens, who died of cancer at the same time as frontman Latimer was battling a terminal illness.

Ten years later, Latimer has regained health and is willing to celebrate a career that spans over four decades. This two-set show will also embrace compositions recorded throughout those years in a personal covenant of appreciation for a deeply rewarding life of music.

Pete Bardens was the driving force in the beginning, he started the band in the spring of '72. Kevin Smith, later a member of Unicorn was shortly a guitarist too.

With Snowgoose ('75 after the book of Paul Gallico) Camel impresses a big audience. In '77 Fergusson is be replaced by Richard Sinclair (ex-Caravan) and Mel Collins.

Camels changed a bit to a more jazzy sound (Raindances '77).

Phil Collins is unmentioned with a little percussion on "I can see your House from Here" ('79), produced by Rubert Hine.

Nude ('81) is a breakthrough in positive way;

A few years later they released On the Road 82, a life bootleg, recorded in The Hague (with 3 (ex-)members of The Alan Parson Project):

Pete Bardens is at the studio for a short moment and even live he's at the party (Pressure Points '84):

And there's a huge gap, what happened to our camel?

Lattimer has enough camels collected, so the album isn't so good i think.
In '96 is Lattimer back on front with Harbour of Dreams;

Again he goes on tour with;

Colin Bass makes a own album ('99). And Latimer stays busy with his camels;

Rajaz '99 (he looks back to Snowgoose). The layout is very camelesque. With; 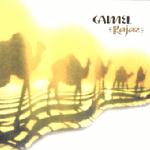 Begin 2002 a lot of older material is released again with some extra bonus tracks.

An interview from Progressive World.Net.
A Nod and a Wink ('02):
A very flodian & camelsque-album, great solo's, bits of the Snow Goose and Rajaz, it reminds me a few times to "Amused to Dead".
And dedicated to Peter Bardens, who died in January this year.

Congratulations on your 30th Anniversary;
a great album!

Go and see them!
Tourdates are canceled because Guy's wife had a heart-attack! Hope she will recover soon.
Camel have found two replacement keyboard players for Guy LeBlanc. Tom Brislin, who recently toured with Yes on their Yessymphonic tour, will be joining Camel on the USA leg of the tour, while old Camel cohort Ton Scherpenzeel, who previously worked with the band in the early eighties, will be tinkling the ivories on the postponed European leg. October looks to be the period when the European tour will be rescheduled, but no specific dates have been announced yet. In the meantime, earlier this year Andy Latimer sat down with some very old friends to record an album. These very old friends are none other than Camel members of the first hour Andy Ward and Doug Ferguson! A release is expected late this or early next year. Source: Camel/ DPRP (thanks to 'Paris', 'Chris', 'Jeroen', 'Eric' & 'Peter').

A wonderful show in a wonderful beautiful old Theater! 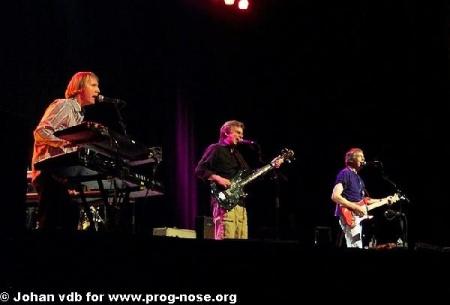 More pictures at www.prog-nose.org
Andrew became very ill, heard is slowly getting back to normal live again.
We wish you all the best Andrew! NEWS 2013: Camel have re-recorded The Snow Goose as teaser for the upcomming shows. All shows are sold out except Manheim and Fulda!.