Arjen Lucassen - keyboards, drums, synthesizers, guitars, vocals and more sounds (ex-Vengeance). And of course born in the Lowlands.
Actual Fantasy ('96) has a few metal bits and a few floydian links. The Final Experiment is a rock-opera. Both albums are selling well in Japan. In '97 he recorded at the Abbey-road-studios a cover-album with music of the 60-ies: Strange Hobby. In '98 with a stilted album called Into the electric Castle. A space-opera on two ceedees:

On Ajans playlist where standing: Paul McCartney, David Gilmour, Robert Plant and Kate Bush. Who knows?
Universal Migrator part I & II are his new adventures in the summer of 2000. Part one is a bit relax here and there a floydian atmosphere, part 2 is heavier. 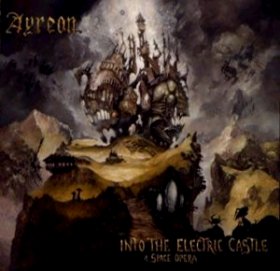 Ambeon: Fate of a Dreamer (2001), is a new project from Arjan with the 14 years old Astrid van Veen, who wrote all the lyrics and sings very good, certainly if you consider her age. An album with a mix from different styles; ambient, gothic, metal and a little Irish folk with flodian guitar-solo's and nice keyboard work.
Arjen Lucassen: 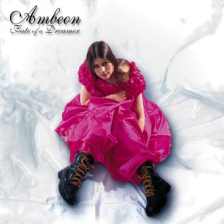 "Originally I set out to record an ambient instrumental album based on certain electronic patterns, chords and melodies derived from the recorded tracks of existing Ayreon songs. In the process some new songs evolved, and I figured it would add a warm human touch to feature female vocals on one or two songs. At that time I heard a recording of a 14 year young Dutch singer named Astrid van der Veen. This was exactly the voice I was looking for, and I asked her to write lyrics and melodies to go over some of these re-constructed ambient tracks and then sing them. This arrangement worked out extremely well. So before I realized it the album had developed from an instrumental album with two vocal songs to a vocal album with two instrumentals!"

Lana Lane - vocals on one track,
Erik Norlander - synthesizers on one track and
Walter Latupeirissa - a dutch bass-payer (who worked with Snowy White).

Astrid did some session for After for Ever; live at the Bospop-festival July 2001 (in the beautiful South of the Netherlands). Arjen Anthony Lucassen's Star One: Cover, tracklisting and release date have been announced for Space Metal, the first album of Lucassen's Star One project. There will be a limited edition release of the album which will include a bonus disc. ( May '02).


Live at the end of 2002 with a space trip and the astronauts were:

The new splendid album is called (May '04):
The Human Equation, with a lot, i mean a lot, of guests;

The Human Equation is a rock opera featuring a whos who of modern-day artists in a mammoth production spread over a hundred minutes and two CDs. The story is about a man who has an unexplainable auto wreck and is comatose in hospital, while his wife and best friend keep a bedside vigil. There is nothing physically wrong with the victim (shades of Tommy?) but he has to fight his way back to consciousness by working through many memories, including the recent events that built up to the accident. The storys ending may be predictable to some, but the whole thing is quite fun  and infinitely better than those improbable space stories that defined most of Lucassen previous work.

The New Single Day Eleven - Love is out now:

The album called The Human Equation will follow 24th May.

Another single is already released, with; How You Gonna See Me Now (Alice Cooper cover by Mike Baker & Arjen Lucassen) and Into the Black Hole (live at the 'Stairway to Heaven' Pre-release party 18 April, 2004).

The third single from Ayreon's 2004 album The Human Equation will be released on June 16th 2005. It is called Come Back to Me, and is a slightly extended and newly mixed version of the song Day 7: Hope. Other tracks include:


Then it became time foir another project Stream of Passion.

AYREON: The artwork of the new Ayreon album 01011001 has been revealed (click above for larger version). The cover artwork is once again done by Belgian painter Jef Bertels , who also did the covers for Into The Electric Castle, The Dream Sequencer and The Human Equation. For the lay-out artwork (the images inside the booklet) Arjen has called in the talents of Colombian graphics artist Felipe Machado Franco. You can check out his website at this location.

As Ayreon fans have come to expect from Arjen, the music of Guilt Machine ranges from dark and heavy to atmospheric and melancholic. But Guilt Machine introduces some new twists as well, particularly when it comes to the vocals. Rather than putting together an ensemble cast of vocalists from the prog, rock and metal scene, Arjen has enlisted the talents of a single alternative rock vocalist, Jasper Steverlinck.
The art for the cover and booklet was created by Christophe Dessaigne, a talented new artist whom we discovered (quite by chance) while browsing Flickr. Coincidentally, it turned out that Chris is an Ayreon fan, and was thrilled beyond belief when we asked him to do the artwork. The Guilt Machine logo and packaging layout were created by Thomas Ewerhard. Didn't had time to listen to disc 2... but i'm impressed by the regular disc. And althrough i'm not a big fan of all his previous work, i really enjoyd the songs on this cd. Some smooth rock songs with a nice dept of sounds. A few songs are really moody and are full of Beatlesques harmonies and others have a more metal approach. Some great solo's from Lori, who was responsible for all the lyrics (well done Lori). Nice structures with layers as we are used from Arjen.
And yeah the drums from Chris are powerful where it is needed and sweet and gentle on the other points (it reminded me to the Blackfield albms).
So yes this worthed a buy.
8+ out of 10 points.
New Sound samples:
www.myspace.com/guiltmachine 2012:
Arjen is working on a new album. The naration will be done by Blade Runner Rutger Houwer!
video.

Pythagoras - After the Silence (1981), a Dutch symfo band.
Alex Bollard - Pink Floyd Songbook (1994), Arjen sings on Arnold Layne, See Emily Play, If, A Pillow of Winds and Take it Back.
Ian Parry ('93-'95-'99).
Helloise - A Time And Place For Everything (1998)
Block Busters - Powder to the People (1999), Arjen does vocals and plays lead guitars on 'Jean Genie'.
Peter Daltrey - Candy (1999).
Within Temptation - Mother Earth (2000), Arjen plays a guitar solo on 'Dark Wings'.
Glass Hammer - Chronometree (2000), Arjen plays additional lead guitars.
After Forever - Emphasis (single) (2002).
Lana Lane (on a studio-album ('00) and live in '02).
Wicked Sensation - Reflected (2002), Arjen wrote lyrics, sang backing vocals and recorded the vocals of Robert Soeterboek and Damian Wilson.
Jabberwockey, with Oliver Wakeman.
He did some mixing for the Dutch band; Sun Caged with keyboard player Joost van der Broek.
Guest keyboards on Once And Future King ('03) a Rock Opera written by Glen Hughes.
Ars Nova - Biogenesis (2003), Arjen plays guitar on the tracks Biogenesis - Meltdown, Escape and Trust to the Future.
Nightingale - Alive Again (2003), Arjen plays the end guitar solo on the song Falling.
Amadeus' Spell (2004).
Space Mirrors - The Darker Side of Art (2004), The debut album of the international space rock band Space Mirrors "The Darker Side of Art" (featuring Arjen A. Lucassen) was released through Dead Earnest.


ProgAID ('05). He did 3 amazing guitar solo's for this great Project.

Arjen did an interview with David Gilmour.

Please be so free and sign my guestbook.
Updated December 2009 by Nick.
Arjen and Lori thanks!
Shine On!
www.mostlypink.net