Live pictures June 2010.
Interview with
Martin Orford (Feb 2005).
NEWS:
August 2012:
Birdman films (the company producing the Subterranea movie based on IQ's classic concept album) have launched a Kickstarter fundraising campaign. Anyone with an interest in the band or the movie is able to pledge an amount to help ensure the film gets the funding it needs.


SUBTERRANEA 2012
IQ return to The Met, Bury on November 10th 2012 to perform their 'Subterrnaea' album in its entirety. This may be the only UK Subterranea show so, as always with Bury, a sell out is expected. Tickets on sale soon.

Video of the live rehearsals here below + the final line upp.

Paul Menel the ex-singer of IQ, hits the road with John Jowitt.

Sympho-band in the slipstream of Marrilion. They, Martin Offord and Mike Holmes, started in the New Wave and punk era as The Lens. A CeeDee (A World in your Eye) was released and let us hear a mix of Camel, Steve Hackett, Pink Floyd and Orzic Tentacles. It didn't worked for that moment and so IQ was born:


They first released a cassette Seven Stories Into Eight ('82), followed by first vinyl album called Tales From The Lush Attic ('83). Prog from the eighties, Pete sounds a bit like Peter Gabriel, and yeah still impressive.
The Wake was their next album and Nichols left to form Niadem's Ghost.

Their third studio album, Nomzamo ('87), was recorded with the new vocalist, Paul Menel.
It seemed that the albums Nomzamo (with the single Promises '87) and Are you sitting comfortable ('88) IQ reached more audience. Certainly the last mentioned album is great!
Menet en Essau leave and Nichols sings again in IQ. The bassist Les Marshall died tragically; committing suicide. Then Jown Jowitt (ex-Ark, The First) showed up ('91).
The double-live album from '96 is very enjoyable;

Martin Orford and John Jowitt have in the meantime started another project; Jadis, with guitarist Gary Chandler.
Subterranae is from '97, some people find this their best album, so listen for your self.
A live concert version, Subterranea: The Concert is also available on both CD and DVD.


The seventh House ('01) is nice again. Complex riffs of more instruments at the same time are very difficult to play. If you like "Subterranea" and earlier records, this one may not be absent in your collection.

They' did a wonderful gig in Vervier, Spirit Of 66, ('03) and John came back in his underwear for the last encore....

The 20th Annirversery DVD came out in 2004. with a lot of extra's and a nice setlist.

Sacred Sound
Red Dust Shadow
You Never Will
Born Brilliant
Harvest of Souls
Buy it here.
A great album, pure Symfo, 4 wonderful adventureous proggy songs and one great epic called "Harvest of Souls"! Well done my friends. It will end up high in my favourites of 2004.
Highly Recommended!. News: April 2005:
Paul Cook has decided to call it a day after 23 years with the band...
The new drummer will be 37-year-old Andy Edwards.
In 1997 Andy was asked to play a local gig with Robert Plant which led to the formation of The Priory of Brion and around 100 gigs all over Europe alongside B B King, Skunk Anansie and Billy Cobham at some of the great music festivals. In 2000 Andy became an endorsee of Tama drums, Meinl cymbals and Aquarian drum heads, and he is a regular clinician, playing alongside such drumming luminaries as Simon Phillips, Steve Smith and Thomas Lang. After touring with Thomas Lang on his UK clinic tour, Andy set up his own drum school in Cradley Heath, West Midlands.

1985 IQ 'Live From London' Performance Released on DVD ('05).
The date: 13th May 1985, many hundreds of years ago. The venue: Londons Camden Palace. In the time of big hair, long fringes and dog collars, IQ were filmed onstage for the TV show Live From London.
In a 60-minute performance, they played tracks from their brand new smash hit album The Wake, together with a selection of old favourites. The full set was: Awake and Nervous, Outer Limits, It All Stops Here, Just Changing Hands, The Wake, The Magic Roundabout, Widows Peak, The Thousand Days and Corners.

pictures by Pierre Romainville.
Thanks! Setlist of The Spirit of 66:

Wonderful gig!
From the opening images on the three screens till the last hilarious credit titles.
Pete got still that amazing etheral voice (something like Jon Anderson?) and that great ability to interact with the audience (if nescessseray only with the his eyes). He's got that stage charisma like a Peter Gabriel, so always nice to watch.
On the right of him was standing Mike Holmes, sometimes the opposite, looks like an older settled houseman... just doing his job perfectly with amazing guitarriffs and solo's. And then realizing he's on stage, funny, happy and spreading out that he's got a good time.
Johnny Jowitt (aka Big Bush Pants) and his bass (-es), he walks arround how normally the leading guitarplayer does. He stirs up the enthousiasm of the crowed, changes basses like David Gilmour changes guitars, and plays them like hell. And as always dressed up well. A wonderful chap.
Mr Ken Bodfish (aka Martin Orford) hiding behind his keyboards & organ, sometime jumping of and showing that he's freaking out too. Don't want to mention his ability on the keys... that stands for it self.
The new drummer, Andy Edwards... just so short related with the band and playing if he was there for ages. Great drummer dares to improvise and is well accepted in the band.
The sound was incredible well, thanks to Rob Aubrey. 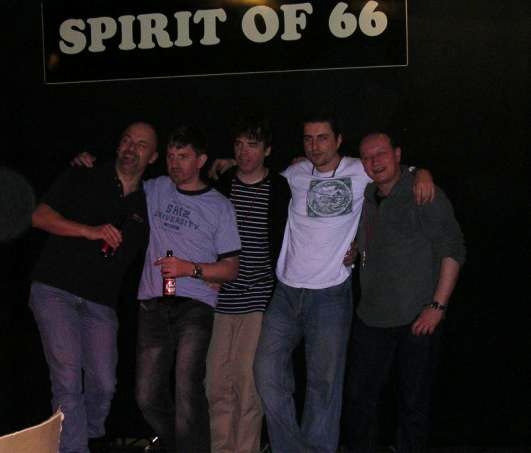 Stage (2006) is the title of a the new DVD of IQ with some great bonus material.

Read a great review at DPRP.


Martin Orford said farewell to the band and he wants to stop with his musical career. Very sad sad news indeed.

Mark Westworth is the new keybaord wizard. Mark played in Darwin's Radio. The much discussed vinyl pressing of IQ's 2004 album Dark Matter will finally be released on the Primal Vinyl label. The record will be pressed on 180g vinyl and presented in a de-luxe gatefold sleeve. Although not strictly a limited edition, the run will be for 1500 albums and at this stage it's not expected to be re-pressed beyond that quantity.
IQ: release two Limited Edition Tour CDs
The new IQ studio album Frequency is scheduled to be released early next year but, to coincide with the forthcoming live dates, November will see the release of two new collectable Tour CDs. Both discs will feature about 40 minutes of exclusive material, unavailable elsewhere, including brand new recordings from the studio this year and rare archive material, stretching as far back as 1985.

These Tour CDs (Archive Collection Volumes 2 and 3) will be limited to 1000 copies each and will be on sale at the concerts in November and December. For those of you unable to attend these shows, the discs will also be available by mail order at a later date, details to be announced shortly.

The full track listings are as follows:

IQ: have now finally finished the mixing of their new album entitled Frequency - their longest single album to date at a running time of 62 minutes and 2 seconds ...

They are now working on the audio mix of the DVD for the special edition of the album... Here are some IQ tour dates: 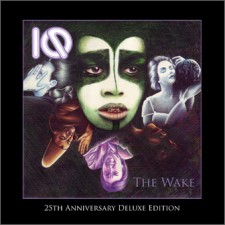 To celebrate the 25th anniversary of IQ´s classic album The Wake, GEP is to release an extraordinary 4 disc edition of this recording.

 the remastered version of the album
 two additional discs with:
**work in progress
**rough mixes
**studio outtakes
**demos
**writing sessions
 a fourth disc containing:
** minutes of ultra-rare live video from 1984 (the oldest existing footage of the band)
** a full album video commentary by Peter Nicholls, Mike Holmes and Paul Cook
** the multitrack files for a DIY-mix of the song Corners
** tons of additional audio-material and interviews as mp3 files.
 a 60-page-full-colour-booklet, featuring new artwork, unseen photographs, memorabila and a documentary of the album´s history with contributions from all members of the band.
 a double sided poster featuring the original album artwork

To keep up to date and to enter the IQ competition to win a copy of IQ's 4 disc deluxe edition of 'The Wake' then visit the IQHQ website...


NEWS Jan 2010:
Former iQ vocalist Paul Menel has been working on a new solo album with amongst others John Jowitt (ex-Arena, ex-iQ) and John Mitchell (Arena, Frost* and pretty much every other band in the universe).
The full band line-up is as follows:
The band will embark on a short tour at the end of January. You can expect to hear songs from Pauls new album, as well as material from his stint with iQ and a few more surprises.

Tour dates.
John Mitchell will not join the band on their tour, John Jowitt and guitarist Steve Haris (Ark) will hit the road with Paul. MARTIN ORFORD: Classical Music and Popular Songs. 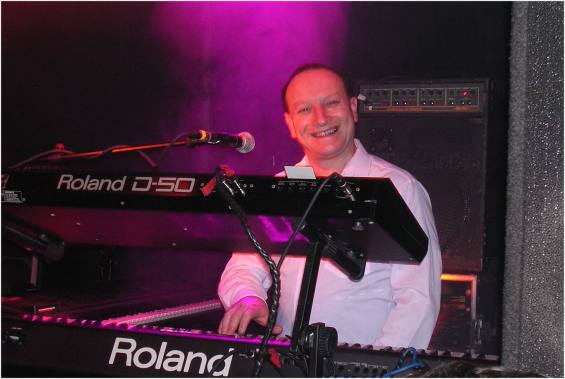 It resulted in a wonderful mixture of some light classical piano pieces, a couple of lost IQ tracks, some nice pop songs and a few prog rock pieces with folky influences.
He put a band together, The Martin Orford Band, and did a few shows ('01):

Martin Orford and John Jowitt are full members of; Jadis, with guitarist Gary Chandler.
He did a guest appearance on Parallel or 90 Degrees, see Guy Manning.

Martin Orford has released his solo album called The Old Road. At the time of writing, the Aubitt-website informs us that there's just one more part to lay down, which is a vocal by John Wetton. Martin's employed an all star cast, including Peter Nichols (vocals on one track), Paul Cook, Nick d'Virgilio Spocks Beard and Steve Christey on drums, Gary Chandler, and Mike Holmes (guitars), Steve Thorne (acoustic guitars) and John Jowitt on bass.

All the best,
Martin Orford."

About downloading:
"With regard to the downloading thing, personally I'm not impressed if we have 2 million fans that download for free - they're no use to us whatsoever and I'd rather have just one that actually buys the CDs. Because if everyone expects to get music for free, all the middle ground of the music business (and that includes IQ) will disappear. And all that will be left are the amateur no-hopers and the superstars. The rest of us will all have given up due to lack of funding. This is not something that could happen, it's happening already, and based on current trends I give bands like IQ and record companies like GEP a life-expectancy of 5 years at best.

The Old Road.
New solo album by former IQ keyboardist Martin Orford ...
Martin Orford is best known as the keyboard player and a founder member of the well-known progressive rock band IQ. After gaining experience in various school and college bands, Martin teamed up with Mike Holmes in 1977 in The Lens, a mainly instrumental outfit from Southampton, England. Having dissolved The Lens in 1981, Martin and Mike immediately formed IQ, and in spite of various line-up changes, the band is still active today, although Martin left in 2007.


Martin Orford, Pete Nicholls & John Jowitt are joining ProgAID ('05 you'll find a interview with Martin there too) and

Martin, John and Paul did some session for Steve Thorne ('05).
The sad news is that you Paul will leave the band...

Thanks to John Jowitt & Pierre, please take a look at his site &
Jean Luc's site.