Bass, stick, vocals and bold first with John Taylor (in the 60-ies) and after that in King Crimson and Projekct Two. Friend of Peter Gabriel and of course playing with him. 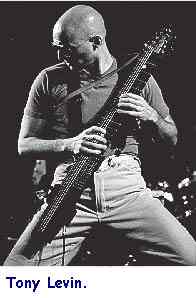 And many more, he even played with Panbanisha and with Kanzi; two Bonobo Apes, Peter Gabriel was of course there...

Pieces From The Sun (2002)
Larry 'Synergy' Fast plays a large role on Tony Levin's new album Pieces From The Sun. After Waters Of Eden it is the second album on which Levin works with Fast. Jerry Marotta is present on this album with his drums, "Dog One" is a song written by Peter Gabriel. The instrumental music on the album ranges from King Crimson/Peter Gabriel-like experimental rock, to jazzrock and symphonic music. A version of Synergy's Phobos from the album Cords has been added, as well. Other projects are: Bruford Levin (Upper Extremities), Steve Gorn, Tony Levin, Jerry Marotta (From the Caves of the iron Mountain, live + video). You can hear what his roots are; Krimson, Gabriel a little funk and jazz.
In '97 you could find him with the two police-men Andy Summers and Stewart Copeland on a few jazz-festivals.
Liquid Tension is a project from '98: John Petrucci, Mike Portnov- drums (both from Dream Theater) and Jordan Rudes - keys (Jordan plays now for Dream Theater).
Liquid Trio Experiment - Spontaneous Combustion ('07) a jam session, no more no less!

Tony Levin Band: Little under a month ago (november 2002) the Tony Levin Band released the live album Double Espresso. The double album contains original compositions as well as covers by Genesis, King Crimson and Peter Gabriel among others.


Picture by Willem Klopper at www.willemklopper.nl.

Resonator ('06); new album with of course, Larry Fast, Jerry Marotta, Jesse Gress and Pete Levin.
Tony Levin:
Stick Man ('07):
"Stick Man is a step in a new direction for me. Or perhaps in an old direction, because, from what listeners are telling me, it's come out quite Crimson-like. That could be because of the great participation by Pat Mastelotto on drums a nd percussion - also I was aiming at more raw, playing-oriented tracks. Backing off from the composition based writing I'd done recently, I've tried to feature not only both sides of the Stick, but some unusual bass techniques and sounds. There are a lot of tracks, (17) and it's mostly instrumental (especially if you consider my shouting not to be a song!) Oh, and we've decided it'd be nice to have me autograph the DGM pre-orders (and in fact I'm holed up in Cape Cod doing that right now -- nice to put the pen down and type a bit!) so if you pre-order, you'll have that, fairly legibly, on your CD! Hope to see you at a concert this coming year." - Tony