Back to Mostly Autumn.

Liam is the great second guitarist of Mostly Autumn, doing some nice rhythm, adding extra flodian sounds and so now and than he's doing a solo that goes down your spinal cord, like the great intro riff form the new version of "Spirit of Autumn Past Part 2". And his lead vocals during the X-mas gigs are absolute in Saint.

The debut solo album by Mostly Autumn guitarist Liam Davison is a cornucopia of aural delights.
Guests include fellow Mostly Autumn band mates,
All songs are new compositions by Liam except 'Once In A Lifetime' a joint composition with Heather Findlay which is a beautiful piece with a gorgeous concept.
The album is to be recorded at Fairview with John Spence. 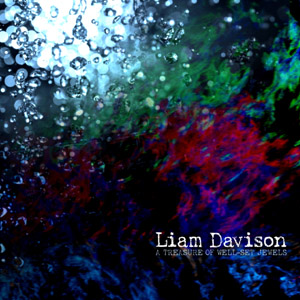 The first edition of this release will be strictly limited to 1,000 copies with bonus material and comes in two versions - 'Emerald' and 'Diamond'.
Emerald edition: Enhanced CD in slipcase with bonus tracks and video material. (800 copies only).

A review By Tim Kalyr
Please have a look at his blog!

Liam is something of an enigmatic figure on stage with Mostly Autumn. He prefers to shun the spotlight and lurk at the back of the stage; but his playing is not that of a typical rhythm guitarist, playing melodic fills and lead runs rather than merely strumming chords. His name has only appeared a couple of times in MA’s songwriting credits to date, both for folk-flavoured numbers. But he’s also been playing a live improvisation on tour with echoes of Robert Fripp. Which made it difficult to predict the direction his solo album might take.

The music varies from the indie-flavoured opening hard rocker “Ride the Seventh Wave”, the electronica loops on “Into the Setting Sun”, and the acoustic ballad “One in the Lifetime”. But throughout there’s a strong emphasis on atmospheric progressive rock with a very strong Pink Floyd flavour. Standouts for me are “Eternally Yours”, ending with that epic slide solo featured in the album’s promo video, and “Heading Home”, with it’s wonderful interplay between Liam’s soaring lead guitar, Iain Jennings’ swirling Hammond organ and Paul Teasdale’s propulsive bass riff. It’s a big, rich, cinematic sound, superbly engineered and mixed by John Spence.

Liam shares vocals with Heather Findlay and Anne-Marie Helder, and the three distinctively different voices complement each other well. While Liam sings much of the lead vocals, several songs are duets between Liam and either Anne-Marie or Heather with some great use of harmony. One exception is “Once in a Lifetime”, sung solely by Heather, who also contributed the lyrics. Heather and Anne-Marie give excellent performances, but neither of them steal the show, this is still very much Liam’s album, showcasing his songwriting, and above all his superb lead guitar. If you like it when the solos can last for two or three minutes, and are still good enough not to outstay their welcome, you will love this album.

While much has been made of Heather’s and Anne-Marie’s contributions, on an album like this the instrumental supporting cast are just as important. In particular, Liam’s Mostly Autumn colleague Iain Jennings excels himself on keys. It’s the sort of all-enveloping cinematic sound we heard on early Mostly Autumn albums, and as such provides the perfect instrumental foil for Liam’s own playing.

This is a superb album, and while it’s only February, it’s a potential candidate for album of the year. Like many independent releases, it’s got a general retail release in March, but is available online now


Who needs a new Pink Floyd album when we have Liam Davison around?

Pictures by Chris Walkden, Cambridge Rock 2010.
To the Top.
Odin Dragonfly.
Iain Jennings Page
Bryan Josh
Back to Mostly Autumn.
Suggestions, comments, something to ask?
Please click at; or click on reply for feedback-form please

Just a few simple questions and space for comments.
Please be so free and sign my guestbook.
Back to Mostly Autumn's main page.

For all who we've lost, where ever they are.
www.mostlypink.net