April 2010:
Remco Engels is the bands new drummer, replacing Joost Hagemeijer who left the band earlier this year. Engels has been rehearsing with the band and was to fill in for the concerts with Magenta in early May which have been subsequently cancelled. He has now become a permanent member of Mangrove having previously played behind the kit for the cover bands The Genesis Project and Knight of the Progs and is currently also a member of Awaken.

Feb 2010:
Progressive rockband Mangrove and drummer Joost Hagemeijer have ended their collaboration. There is a common conclusion that a productive co-operation is not desired anymore. Manager Henri Heijink: ôIt was a far reaching decision for us all, but in the end an inevitable one. The band is striving for further growth and we are convinced that no musical challenge in whatever form it could appear may be ruled out. The foundation for that is an absolute commitment of the complete band.ö
The remaining bandmembers Roland van der Horst (guitars, vocals), Pieter Drost (bass) and Chris Jonker (keyboards) are pleased to announce that all scheduled gigs will take place as planned.
During the upcoming series of gigs in May drummer Remco Engels will take place behind the drumkit. Remco has many years of experience in different bands and is most of all known for his drumming in ĹGenesis Projectĺ and the symphonic/progressive coverband ĹKnight of the Progsĺ.

Roland van der Horst (guitars, vocals) and Joost Hagemeijer (drums, vocals) start in 1995 with the project ĹBrainstormĺ and release ĹCold Worldĺ in 1998. To be able to do live-performances, a band is formed and the result Massive Hollowness is the first Mangrove release in 2001.
After a line-up change Pieter Drost (bass) and Chris Jonker (keyboards) complete the current line-up. New songs are written which results in the successful release Touch Wood in 2004.
The international press is very positive about the 2005 conceptalbum Facing The Sunset. An album with exclusively long tracks including the magnificent epic ĹHidden Dreamsĺ. The album even wins an award.

Their current line upp is:


Mangrove may be reckoned to the top in the progressive rock genre in The Netherlands and has gained an excellent live-reputation. On one hand because of a well-considered sound, on the other hand because of the music that comes to life through the variety in tempo and dynamics, with modest passages, but also with heavy symphonic eruptions. The listener is carried away on a musical journey. Mangrove makes music that lives! The 2006 double live album ĹComing Back To Liveĺ is the Ĺliving proofĺ of that in 2 cdĺs which offer a beautiful cross-section of the first three albums.

Coming Back to Live ('06) is an absolute fine Prog album. Really good live recording of those craftsmen from the Netherlands. A mix of old 70-ies Prog a la Genesis and some new influences. Sometimes you can hear a Tony Banks keyboard, listen to "Fatal Sign", what is a superb song with great dynamics, tempo changes and poundering bass loops. Roland vd Horst has a good voice and is credited for a few awesome guitar solo's ("City of Darkness" & "Facing the Sunset"). One of the best new 70-ies melodic Prog album i heard in years.
If you're able catch them life! A new Star on the Prog scene.
Highly Recommended!

They have uploaded a new track to their MySpace page which features excerpts of the 20 minute epic Hidden Dreams which is featured on the double live album Coming Back to Live and the concept album Facing the Sunset .

They did support The Reasoning on their Dutch tour on 2 dates:

News May '09
Mangrove has release the new album Beyond Reality on June 27th 2009 in collaboration with Rockstage Gigant!

The title 'Beyond Reality' seems to fit the great expectations of the band very well. Beside the epic tracks like ĹDaydreamerĺs Nightmareĺ and the vivacious ĹVoyagerĺ, there is the title track 'Beyond Reality' which inherits everything of a classic rock song suitable for a wide music loving audience.
The album has a fabulous sound and belongs to the Top of the Dutch prog scene. Okay it's old fashioned Prog, but with a great style and new licks.
So the album has a Genesis feel, but also influences or likeness with the old Pink Floyd (Echoes stylish), Steve Hackett and even my mind went to Deep Purple.
The main body of the sound are the excelent keyboard layers and the great guitar work.
With this new album, Mangrove intends to make a clear statement: pushing the limits in an amazing way and they succeeded, they succeeded very well.

Go download it and i'm convinced you will buy it afterwards.

Review Beyond Reality
Mangrove is an old stylish Dutch Neo-Prog Band. Their last studio album was recorded 4 years ago. Has it been worth the wait? Absolutely! With Beyond Reality Mangrove rise above the skies of the Dutch proggy flatlands. The overall sound is excellent, the tunes adventurous, full of dynamic changes, well crafted and above all melodic. So let's have a look at the songs:


Mangrove prove with this disc that they belong to the Top of the Dutch Progressive Rock scene and yes, think they entered the top 7 of Neo-Proggy bands.
Okay the sound has a great likeness to Gabriel-era Genesis (but did they fly so highů? Yeah okay they were good too ;-) Camel, Pink Floyd and the old Marillion. But itĺs how it all melts together that makes it unique and really well crafted. So maybe we should stop comparing this band to the oldies.
If you like fluid melodic Prog which has an adventurous edge, try these guys from Apeldoorn, youĺll not be disappointed.
I want to see them live again.
9++ out of 10.

Just a review, there are more on their site:

Mangrove at the Spirit of 66 / Verviers.
03 October 2009.
Mangrove was the opening act of the Prog Rest. Convention.
The last time i saw them was 2 years ago, they supported The Reasoning twice here in the Netherlands, and i was impressed twice.
Verviers is a mad mad city, one of the poorest of Belgium, not very cheerful, it's 40 minutes driving from my house (60 miles), it took me another 30 minutes to find a parking place....

Anyway i entered the cozy venue and a perky keyboard from Chris filled the space above the heads of the 220 people, Mangrove just opened. They were full of energy, eager to play and it sounded very well. Francis (the venue owner and behind the desk), managed to get a clear full sound in the first song. Heavy keyboards and soaring guitar solo's. The vocals were nice and pleasant.
The sound is a bit similar to the old Genesis sound, but with an own Mangrovian appraoch.
The crowd loved those boys and the applause was loud, very loud with a lot of jelling. Mangrove made a clear statement; we want to be the headliner next year! And yes they already deserved it. Anyway their set was ended in a wink of an eye... what a shame... so yes i was impressed again, the band was more tight, and better as before.
This is band to keep an eye on, think they should be able to reach a bigger audience and bigger stages.

So after seeing Moongarden (nice but not so...) i went home, had to work the next day and seeing Mangrove was more then enough... dind't want to see the rest of the festival anymore, so i missed Damian Wilson, sorry.... 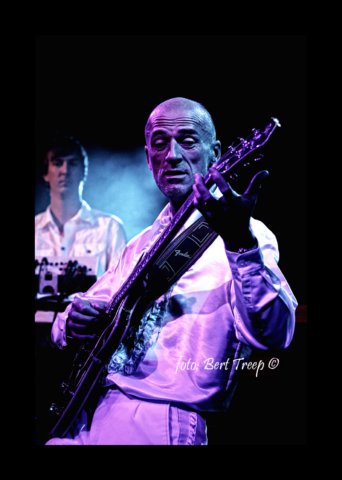 IQ and Pendragon, stay out Holland... we got Mangrove.
(but please come to the lovel South ;-)

The Dutch Prog-Rockers Mangrove are very active with special gigs, gimmicks and last Saturday with a pretentious dvd recording at De Boerderij / Zoetermeer. Together with Knight Area, PB2 and... they are the "new" toppers of the Dutch Prog scene. And they proved that they are in the same league as Pendragon and IQ.
Flaweless play with a cheerful attitude, interacting, well crafted... and i'm not a drummer boy but Remco is a highlight in the drumscene.
Typical for Mangrove are the long epics. The lighthearted keyboard play of Chris, he has the ability to play keyboard with a big grin and his way of hitting the keys makes the audience smile.
Roland is a busy guy on stage, laying down fantastic solo's, making jokes, driving around (?) and above all those solo's...
The forth member is the solid Pieter, grooving arround, enjoying...
Mangrove has the link with the early Genesis, specially the ability to sound like Tony Banks with perky keyboards. Filled with sometimes a Roland Hackett solo powered by the emotion of a driven well crafted band.
Good sound excellent light plan and some funny gadgets that worked out well.
There was a good crowd, that got into the show with cheering and a lot of applause.

Resume; finally a Dutch band that has guts and proves that Dutch Prog is a live and kicking!
Next year they have a 10th birthday party, i hope in the lovely South as well ;-) 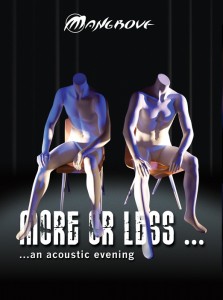 The DVD contains the recordings of the unique acoustic show that took place in a sold out theatre of venue ĹGigantĺ in Apeldoorn (NL) in 2010. The DVD will be entitled ľ like the show ľ ôMore or Lessůö. It is the second DVD in a series of three that is released in succession. Recently Mangrove already presented their first live DVD ôLive Beyond Realityö. Beside this the DVD recording show that was performed at ĹDe Boerderijĺ, Zoetermeer (NL) will become the last part of the DVD trilogy.
ôWe have challenged ourselves to experiment with our symphonic compositions and to try recreating the essence of them in the intimate atmosphere of a theatre.ö, says keyboard player Chris Jonker. Guitarist/singer Roland van der Horst adds: ôIn this unique show Mangrove shines a new light on the many songs weĺve written in the last years. To play with some exciting new - but yet well-known - melodies and sounds is just wonderful. Seeing this DVD causes the same excitement to us that we had during the show.ö The DVD will also contain a beautiful performance of Peter Gabrielĺs ôHere comes the floodö.

Go out and see them! One, maybe the best Prog band of the Netherlands:

Roland van der Horst
He played and sung in Knight of the Progs, the other singer is Maaike. Her voice is from an extreme beautiness and is often compared with Kate Bush.
So they cover; Genesis, Pink Floyd, Yes, ELP, UK King Krimson, Marillion & Kate Bush.
Knight of the Progs

Nowadays Roland sings in Genesis Project with Remco on the Tomtom.

to top
Please visit my guestbook.
or click on reply for feedback-form please