The name of the Greek goddess of war, wisdom (& needlework!!) Pallas Athena... also known as Athene or Minerva.

Scottish Proggers since the begining of the eighties. The Sentinel ('84) is a nice album with a great cover from Patrick Woodroffe in Roger Dean style.

On The Wedge ('86) sings Allan Reed and is Mr Lowson moved out. The sound is a bit heavier, 'Just a Memmory' is my favourite track.
The band made a few records and kept on performing. In the late 90-ies begin 2000 they got more productive; Beat of Drums ('99) and The Cross & Crucibe (2001) is a good album with nice prog-art-work.

The Dreams of Men ('05) is an well recieved new album of this Scottish band. Not really hard prog, but prog with an harder edge ;-) Splendid art work and a nice limited edition for a reasonable price. 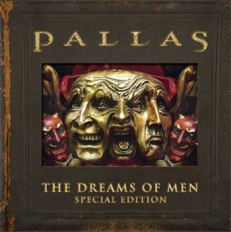 "A discussion took place some months ago, where personal views and opinions were put forward. At this meeting, the idea of what the band might sound like with a new voice, and look like with a new front was put forward - and it was met with a long silence - but not opposition. It was like a fire had been lit that couldn't be contained. We know lots of good local singers, largely due to the existence of the two studios - and there's one guy that stands out from the rest. He has a different voice, different stage personna - different not necessarily better - and it turns out he's up for it. All I know is there's a buzz. We've been working round the clock at the Mill all of January in anticipation of the new sound - and we're all excited, first time for as far back as I can remember.
And that's the central point that there's no way back from - we all want to take the hugely radical step of changing the public interface - in many respects, simply to see what happens. I can't even begin to imagine what you're feeing right now - but for the rest of us, it's either this very radical step or no band at all."

Following weeks of speculation, Pallas have finally announced that their new vocalist is fellow Aberdonian Paul Mackie.
Paul who is probably known throughout the world as one the vocalists on the Grand Theft Auto games, culminating in GTA Vice Citys very own fictional Scottish Rock Band Love Fist. This band was put together to record several songs co written by Paul and various members of Rock Star Games talented staff. 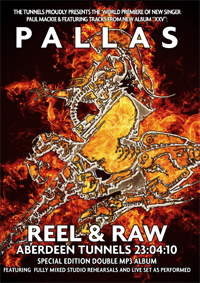 The first public performance by Pallas' new vocalist Paul Mackie took place at Aberdeen Tunnels on Friday 23rd April and to mark the occasion both the gig and the rehearsal was recorded and will be released as a download under the title "Reel and Raw", as the name suggests it captures the band live and as live at the rehearsal with no overdubs, multitracking or going back to fix the odd glitch.
Download here.

'C'est La Vie' is a Greg Lake song specially recorded for the forthcoming Emerson, Lake and Palmer tribute CD 'The Endless Enigma' to be given away free with the next issue of 'Classic Rock presents Prog' magazine. It features Alan's unique voice and 12-string guitar alongside the spectacular piano playing of Mike Stobbie, also a former member of Pallas.

Alan said: " When I heard about 'Prog' magazine's ELP project I immediately thought of this song, as it's one I've always loved playing. I persuaded Mike that we should take time out from working on my forthcoming solo album to see what we could make of it. I'm very pleased with the results."

Alan and Mike continue to work on the album - tentatively entitled 'HomeGrown' - which encompasses a range of styles from Celtic-folk to progressive rock.

Alan be playing with Neo a new supergroup at The Rites of Spring Festival 2006.