15 May 1953, Reading, Berkshire, England. Multi-instrumentalist Mike Oldfield wrote history with his debut and master-piece Trubular Bells ('73). He wrote before his 20-th birthday. A symphonic epic which sold more as 12 million copies. 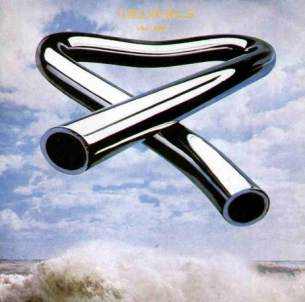 He began his career by playing guitar with his sister Sally in pubs with Marianne Faithfull and they made folk. Sally & Mike made Sallyangel, before Mike left and went to Kevin Ayers (And the whole World). What after that happend is history.
Mike Barnson just started the record company Virgin and gave him some studiotime. The 49 minutes short elpee was a series of basic melodies based on folk, rock and classic, with a various instruments. Soundscapes were used for the film The Exorcist, and a shorter version was released as single. He played almost all instruments by himself with a small contribution of:

Hergest Ride he made with some guestmusians.

With arranger Dave Bedford (a former collaborator of Kevin Ayers) they made The Orchestral Tubular Bells ('75).

Ommadawn featured a team of african drummers and the uillean pipes playing of the Chieftains'Paddy Moloney. And again one elpee with one long epic.

The shy and withdrawn Mike worked on his personality and made Incarnations with disco-elements and Exposed a live album recorded at several places.

Crises ('83, with the hits Moonlight Shadow and Shadow on the Wall):

he wrote film-music for The Killing Fields ('84, with Ebenard Schoener). On Islands ('87) with guests as:

Appenrently there isn't much inspiration, Voyager('96) contains celtic influences. John Miles is one of the guests.

Followed by Trubular Bells III ('98) and Guitars('98). Millenium Bell an album with classic vocalist, Faithless-influences and the The London Session Orchestra.

In 2002 agian with a a new album: Tr3Slunas, with vocals from; Sally Oldfield, Amar & Jade Sim and drum programming by Phillip Lewis.

Mike Oldfield has finished the rerecording of Tubular Bells, his classic debut album originally released in 1973, and has delivered the results to his record label Warner Music who were apparently verry happy with it. Oldfield reports he will be laying down the 5.1 soundmix this week, and aims at a May 2003 release, just in time for the 30th anniversary of the original Tubular Bells.

And in the summer of 2003 there is Trubular Bells the Super-Audio CD. A new recording, all done by Mike under the perfect conditions and a perfect sound, but the original elpee, with that tiny scratch...