Dragonflies, or damselflies, were connected to Freya the Norse goddess of love, fertility and warfare. Freya was famous for her beauty and her knowledge as a magician. It was she who taught Odin the shamanic practices known as seidr which were still practiced during Christian times. The paired bodies of mating dragonflies form the shape of a heart, perhaps being the source for that modern symbol of love. In ancient lore, the dragonfly represents transformation, adaptation and insight. By Nick Byron.


Odin Dragonfly happens to be one of the only female, multi-instrumental duos on the circuit, creating an appeal that is both very fresh and unique. These women are already gathering a reputation for their musical prowess alone, which, has been described as beautiful, accomplished, elegant, and varied. " 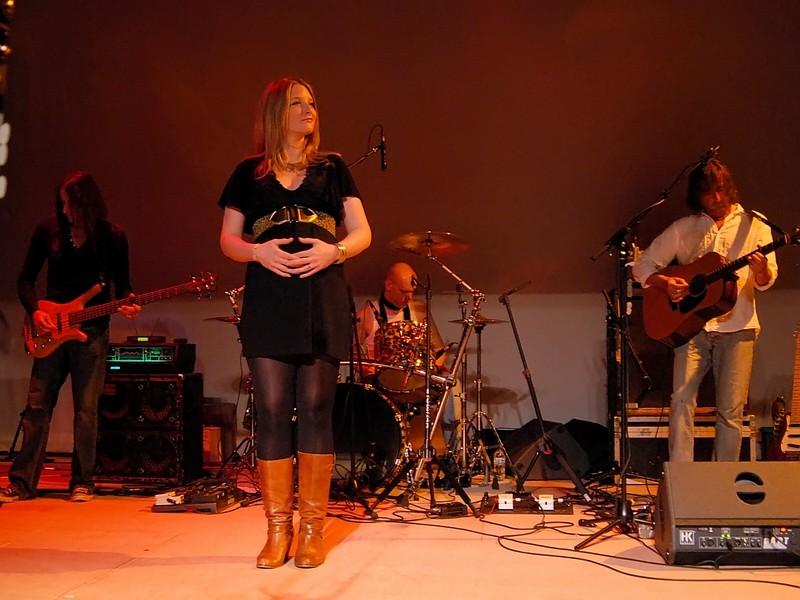 Mostly Autumn and a shining Heather Findlay,
by Chris Walkden.

And Angela in the same position aswell: 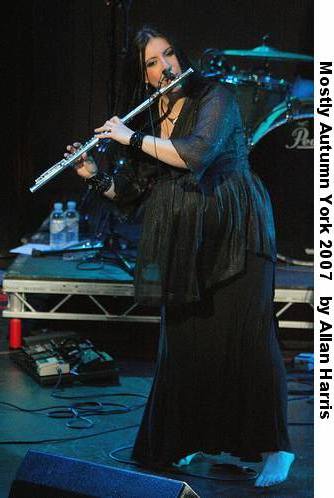 Live performances of Heather Findlay and Angela Gordon, took place in the Autumn and Winter 2005 in York at Fibbers (in York) & Blakely (headline act!).
In the meantime more gigs are planned (look below) and in the future there will be a cd (look below).

Part of the Review by David Meadow. 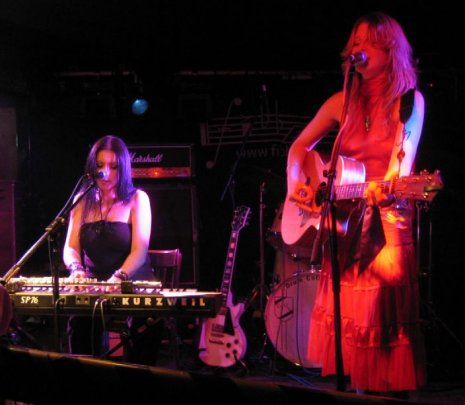 .....First was a new band called Odin Dragonfly, which consists of two women: one sang and played acoustic guitar, the other one sang and played keyboard and flute. (I don't think they actually gave their names!) Now it's probably not a secret that I'm rather fond of flutes, so I was quite happy with this combination. Both have beautiful voices and both are very good with their instruments. If I had one complaint, it’s that they were actually over-amplified — I think they would have suited a venue where they didn't have to compete with the bar crowd and could have played a "proper" acoustic set. Their set lasted about 35 minutes and included Steal Away, The Eyes of the Forest, Bitterness Burnt, Caught in a Fold, a Jethro Tull song (Witch's Promise, unless I’m very much mistaken), and two or three other (new) songs that I unfortunately don't recall the names of (one was called Give it Time, or something like that, and was most Divinely sung). Overall I was very impressed. This is a band I definitely want to see again. And they said they were part of another band, too. Called Mostly Autumn, or something like that... Pictures Read more.

Making a round trip of 7 hours to see an unknown duo play for 30 or 40 minutes could be considered as rather eccentric behaviour. However, once you realise that the duo concerned is Heather Findlay and Angela Gordon, it all starts to make sense. This turned out to be a great opportunity to see two incredibly talented musicians show us a different side of themselves. In Mostly Autumn all we get to hear of Heathers guitar playing is the occasional bit of acoustic strumming but last night she demonstrated that not only can she play guitar but do so very well. Her playing ranged from purposeful strumming to a very delicate (and quite unusual) finger-picking technique.

Likewise, Angela was equally impressive on the piano and keyboards. In fact Iain Jennings would well advised to keep en eye on her in case he finds himself out of a job!

And as for her flute playing, well if you closed you eyes during Witchs Promise youd have sworn it was Ian Anderson playing.

The set-list seems to have been the same as the gig supporting Focus last month. The ones I can remember are Steal Away, The Eyes of the Forest, Bitterness Burnt, Caught in a Fold (which works brilliantly as an acoustic version), Witchs Promise and a couple of others which I cant recall the names of.

Heather and Angie deserve to be really proud of the project. If you can get to see them, you really should. You wont be disappointed!

Sadly it was all over far too quickly as it was only a support set to Circulus, who are worthy of a mention too. Imagine the bizarre love child of Steeleye Span and Ozric Tentacles, raised by a combination of mediaeval monks and Monty Python, and you might start to get the merest hint of what they are like. If I tell you that they encored with a number called "Power to the Pixies", the picture may start to become clearer! Featured an eclectic range of instruments including a thing that sounded like a claghorn (as used on Jethro Tulls first album), this bands music is, to be frank, weird!  And yet somehow strangely compelling. Worth checking out for the experience. 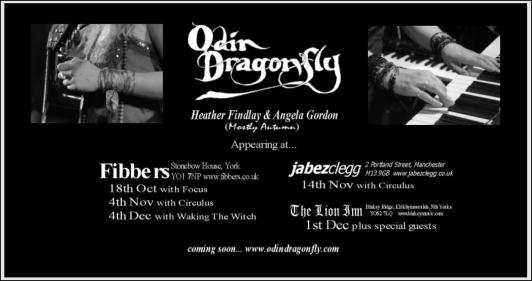 The time has now come for Odin Dragonfly to put on their very first headline show at none other than the Lion Inn, Blakey Ridge on Thursday December 1st with very special guests GT Turbo and Adam Rogowski.
Bryan Josh was so friendly and played guitar on one track; Bitterness Burnt.
Some new songs were played: Waiting For The Snow', 'Magnolia Half-Moon' and 'Magpie'. Of course some rare Mostly Autumn tracks such as a stripped down acoustic version of 'Heartlife'.

Sound Samples on their site!

Odin Dragonfly Home Page, please visit the girls ;-)
NightTown, Rotterdam 7th of May 2006.
Odin Dragonfly did the supportact of Fish in the NightTown, apparently Anne Marie Helder had another appointment.
And we were happy with it. They surprised me pleasently by the wonderful harmonies and self written songs. Don't know how they were called, but that will come. Two Mostly Autumn songs; "Eyes of the Forest" & "Caught in a Fold", they were actually written by Heather.
Angela as good as always on flute and keyboard, she can play that excellent. And her vocals suites perfectly by Heather.
Heather on acoustic guitar and vocals, and Mostly Autumn fans already knew that she can do that well.
The set only took 30 minutes and it was very enjoyable, for me they could have played longer, much longer.
But our dear William Derek Dick wanted to play too, so that happened and yes he was great as ever. I was hoping on a duet with his love Heather; "Just Good Friends", but I think the setlist was so good planned there wasn't any room for. Maybe that will happen at the Loreley gig.

Heather & Angela, thanks for your support, I was glad to see you as Odin Dragonfly it was worthed (even I the fact that I didn't could see RPWL in Zoetermeer, so that should be a great compliment for you).
Gonna see you all, Fish, RPWL and you two with the band in Loreley, see Ya!).

An Marie Helder.
At the Fish Convention held at the last weekend of August, Odin Dragonfly with An Marie Helder, did give away and excellent show.
An Marie did the support act for the Fish tour in 2006. NEWS

You would have thought that after recording a double Mostly Autumn album and completing a follow-up tour, it would be time to take a break! Not so for Heather and Angela, who are now in the studio working on Odin Dragonfly's debut album 'Offerings', which will be available from mid February. Pre-production for the album has gone very well and both Heather and Angela are really excited about the project (as indeed are we!).

Offerings  will be a full-length studio album. Currently 13 tracks are planned, 11 of which will be originals. None of the recordings of all of these songs have been released before.

There will be regular updates and insights on their progress available on www.odindragonfly.com from Monday 8th January. We will of course aim to keep you up to date on Out Of The Inn too! 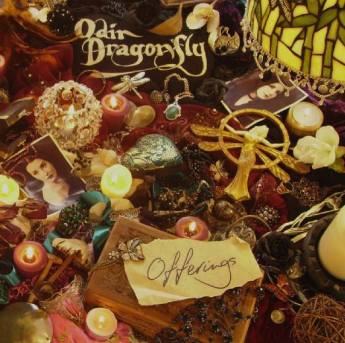 Angela Gordon and Heather Findlay, both of Mostly Autumn, have released their debut album called "Offerings".
Buy it here. 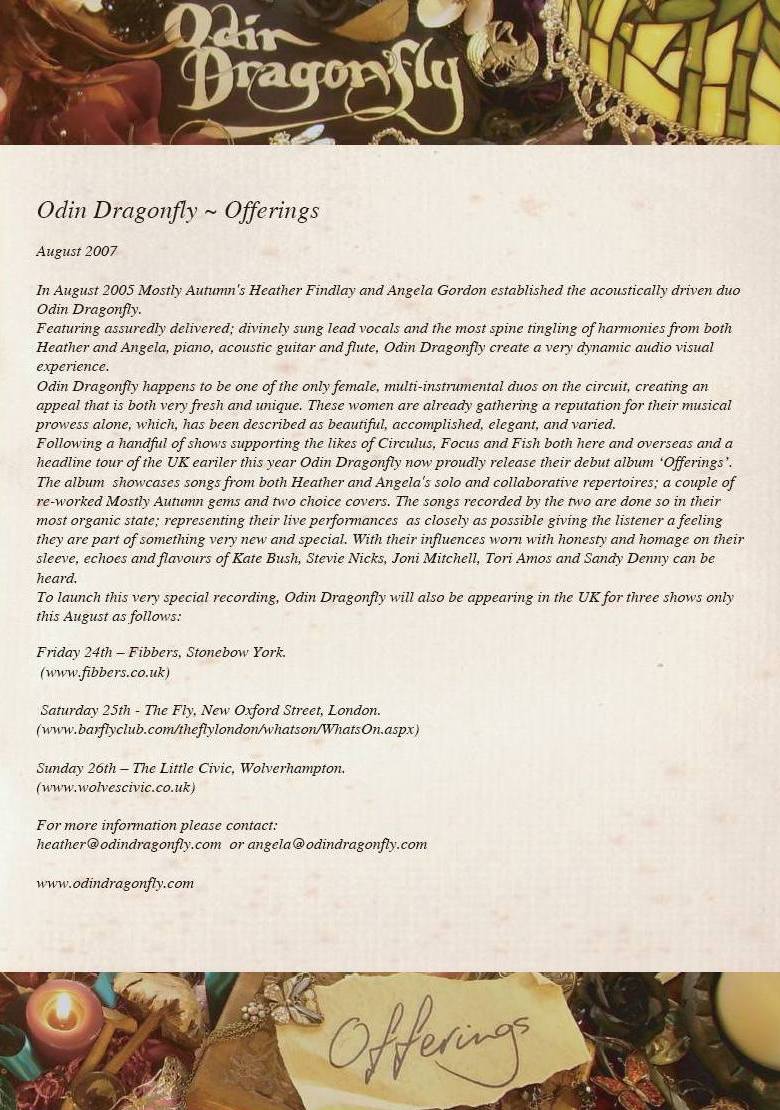 The duo will be celebrating 'Offerings' completion and launch with a small tour. The confirmed dates so far are as follows:

To the Top.
Interview with Heather & Angela.
Iain Jennings Page
session work
Back to Mostly Autumn.
Suggestions, comments, something to ask?
Please click at; or click on reply for feedback-form please

Just a few simple questions and space for comments.
Please be so free and sign my guestbook.
Back to Mostly Autumn's main page.