SILHOUETTE STEPS OUT OF THE SHADOW

An interview by Michel Scheijen for www.Mostlypink.net
Live pictures by Arthur Haggenburg from Background Magazine.

With the superb, new album Across The Rubicon Dutch band Silhouette made a giant leap forward in producing well crafted progressive rock. The periode of standing in the shadow of their nationals like Mangrove and Knight Area has definitly become history. The band is armed with a private-studio now called The Brew where the new album was recorded. Keyboarder Erik Laan gives some insight in the recording and producing of what has already become one of this years smashers.

*Hello Erik, how are you?

Erik: We released our third CD, Across The Rubicon, in June 2012 and are now in the exciting stage of waiting for reviews and the first sales. And it's great to see how positively the CD is being received. Every day we get new emails by new fans who are enthusiastic. In addition we also receive a lot of requests to come play live, and that's fun. So, I could say, we are all doing fine!'

*It seems that the band spent a hell of lot time to optimize their sound, didnt they?

Erik: One of the main reasons for the progress we made was that we could record Across the Rubicon in my brand new studio, The Brewery, which he built one year ago. There was no time pressure and we could take all the time we wanted to work on the songs. With the revenues of our foregoing album, Moods, we also could buy some new equipment, including a new microphone, which helped a lot to record the vocals much more professionally than we did last time.' 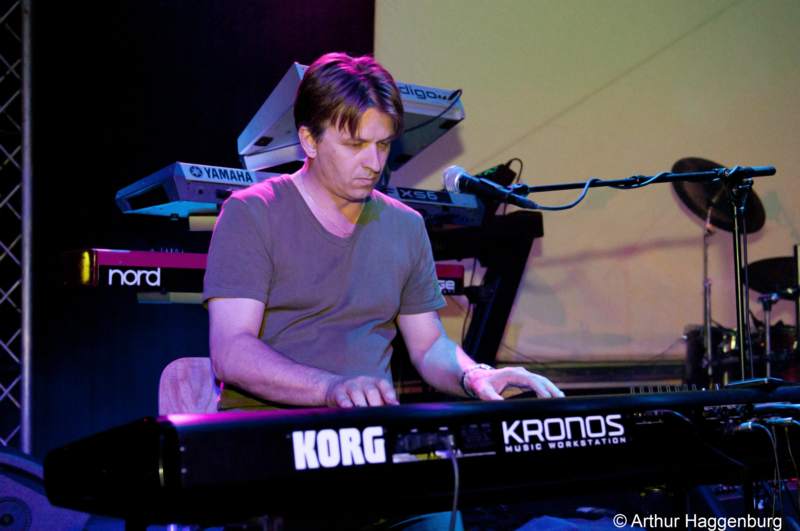 *Was Gerben Klazinga from Knight Area involved in the production, again?

Erik: Gerben worked with us on Moods, but he is far too busy with Knight Area and so he was not able to help us anymore on Across the Rubicon. So we were very happy that Aldo Adema (Seven Day Hunt, Egdon Heath and Tumble Town) was willing to mix the album. We knew Aldo as he did a guest appearance with a David Gilmour like guitar solo on Bed Time Story on Moods. In the process of recording and mixing Across the Rubicon, Aldo appeared to have some very interesting suggestions and ideas which went further than just the mixing and in the end Aldo and I were sort of a co-producers duo. Aldo also added a few great guitar solo's and some very beautiful orchestral arrangements.'

*The songs on Across The Rubicon are based upon personal memories or legends of the past. Why did the band choose for this concept?

Erik: The Rubicon is a small river in Italy which in the era of the Roman empire was an important border. It was known that a general would not be permitted by the mighty senate to cross the Rubicon with an army. In the year 49 BC, Julius Ceasar willingly crossed the river anyway, knowing this would mean war. So, crossing the Rubicon became a metaphor for a point of no return.

When we were writing the new songs somewhere I read this story and immediately I had the feeling that many of the songs had something to do with being across the Rubicon:  looking back to dramatic decisions or events from which no return was possible. When I suggested to the band to use Across the Rubicon as the title for our CD, they all reacted positively. Brian liked it so much, that he wrote the title track the same evening.'

*Every song was composed by an individual member. Did the composer also assigned the structure and further shape of his composition?

Erik: In many cases, Brian, Jos or me came up with the basic chords, melodies, lyrics or structures of songs. Nevertheless, in many cases in the process of rehearsing and recording, as a band we changed things, added arrangements, tried new things, etc. So in the end every song probably has elements of all band members in them. We like this process of working a lot since we feel a certain chemistry in it of which we all think it improves the final product. That's also the reason why we share the credits.'

*When Snows Falling Down is truly one of the highlights on the album.The keyboard-intermezzo in the middle is chilling and beautifull. Whats the idea behind this magic moment that takes one minute and a half?

Erik: Thanks for the compliment, we are very happy with the result as well. I think this specific instrumental intermezzo is a great example of the chemistry in Silhouette that I just described. Brian came up with the lyrics and the chord structure. It is a nostalgic song with a strong romantic feel, about the beauty of snow and ice skating in the eyes of children. I could relate to it immediately and fantasized about how to make snow starting to fall down audible in music including the joy that I felt as a child when it started.  So that's when I had the idea about the little bell sequence that starts hesitatingly, continues for some time, while the music builds up. Jos invented some subtile drums riffs, Gerrit-Jan a great bass line to give further shape to the growing snow storm. The following synth solo was a spontanuous one, and it reached the CD exactly the way I tried it out the first time. I was so inspired with the idea! Then, suddenly, the snow stops, becomes rain, the white snow on the streets becomes wet, grey and ugly, but after a while, suddenly, the snow comes back and the euphoric feeling comes back with it as well. This euphoria is greatly underlined by the childrens choir (sung by our own children) who repeat the chorus. And believe it or not Brian and myself independently if each other came up with the idea to use a childrens choir. Aparently the song itself just asked for it.'

*An edited version of When Snows Falling Down would be a perfect single. It could probably become a hit by sufficient airplay on major FM-radio, couldnt it? 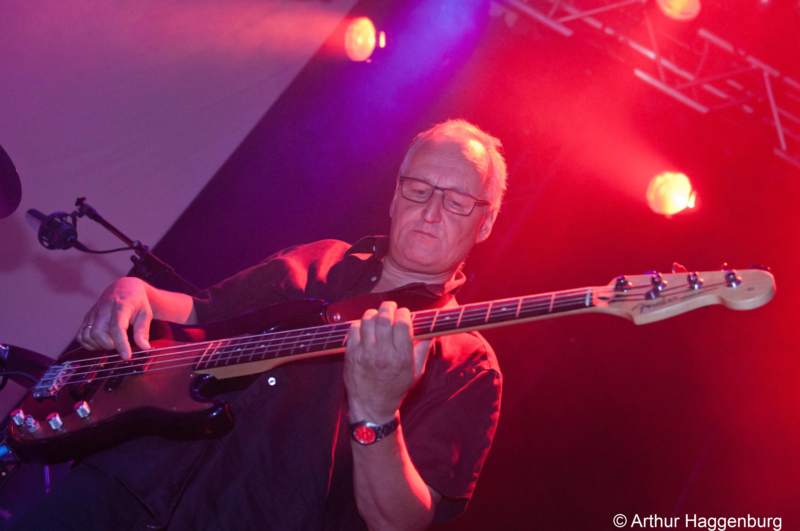 Erik: Thanks for the great idea, but that's exactly what we already did! Around Christmas 2011 we released a 4 minute radio edit as a free download. It was received very well! Maybe Pink Radio can give it some airplay in december 2012? But also the long version was well received. We even have a video clip, made by the Ukrainian artist Ed Unitsky, which was viewed very often and was received very well! This is the link: http://www.youtube.com/watch?v=MK6UFWpkNFs

*Why not trying 3FM-Serious Radio?

Erik: Well, we might give it a try, but as far as I know you have to plug your song through good contacts with the big guys, which we don't have, or through paying plugging money, which we don't have either. I know a guy who spent a lot of money plugging his song, but there is no guarantee whatsoever that these dj's just cash your euro's and do nothing for you afterwards. We rather believe that quality will find its way anyway. But you are right, we should at least try. I will bring it up to our management.'

*Silhouette approaches the classic sound of progressive rock (epics, multiple keyboard layers, etc.).
This particular style is still adored by lovers of progressive rock and a dozen of progbands.
From that point of few it must be very hard to be inventive instead of copying a familiar sound thats developed some fourty years ago. How does Silhouette manage this?

Erik: Well, to be honest we don't think about it in that way. We have no clear intention to write progressive rock, let alone sub genres. We don't want to be copy cats but neither do we pretend to be super original or innovative. We just compose and play the music that comes from our hearts, and there it is; it becomes music that progrock fans seem to like.

What we do believe in is that every song should have a strong song and melody basis. You should be able to play it with a simple piano or guitar at a camp fire as well. Brian has hundreds of songs ready to be worked out.  Every time he comes up with ideas, they immediately trigger my imagination, and I hear then all kinds of arrangements in my head. The same with songs by Jos and I guess this works also the other way around. I am happy to own some nice instruments, including a Korg Kronos, which is a keyboardists Nirvana and gives you all the creative possibilities I could desire, sometimes it's vintage moogs and hammonds, sometimes strings and orchestra's, sometimes thin atmospherics or modern sequences. But I never think beforehand in terms of what kind if subgenre it should be like.' 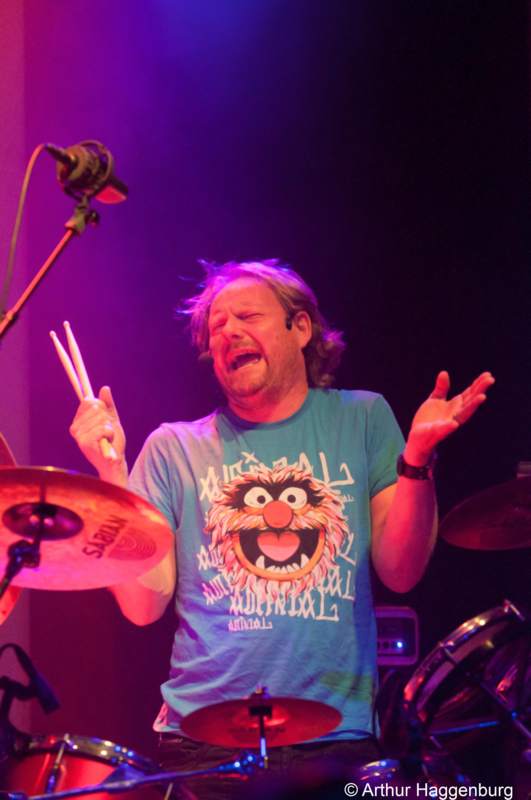 *But you cant deny that theres still a strong link to the classic progressive rock sound.

Erik: All I want to say is, what comes out, is just what our neural patternsapparently produce spontaneously. In our teenage years, the four of us listened to the founders of progressive rock and this sort of programmed us as musicians. Silhouette never sat together in a band meeting or something, deciding; "lets make a neoprog album in the style of this or that band'. We want to tell stories with our music and these progrock patterns help us to do that.'

*All four members have different musical backgrounds, and are very strong characters too. Composing and producing a Silhouette-album doesnt seem to be a senicure.

Erik: You make it sound as something rather complicated. Well, I can take away your concerns, it's not! Making music should be fun and I can tell you, we have a lot of fun together as Silhouette. We have become good friends and if there is any disagreement, we express this to each other in a respectful way.  Of course, we do have our differences of opinion every now and then, but we regard this as a vital tension which will improve the end result. It is not a question of imposing our opinions to each other, but of finding better alternatives that we all agree upon. Actually, I believe this way of working is not only fun, but also the very essence of being a band: A band is more than the sum of its parts. Otherwise, you could better do a solo project and hire session musicians.'

*Are there any surprises to expect during the forthcoming tour?

Erik: Our tour is being put together as we speak. Confirmed is that we will tour together with Landmarq in Belgium, UK and the Netherlands, and we we will play with RPWL in November. We are trying to figure out some other gigs as well, hopefully in France and Germany. We have fans in Poland as well, so who knows. Maybe on one or two gigs Mary might come and bring her flute (and beautiful voice!) And perhaps my son Bart might bring his guitar once or twice to play some songs with us. But of course, his school (he is very talented, but only 16) has priority.'

*Thank you very much for your time and answers, Erik!

Erik: Youre welcome. Also thanks to Mostlypink.net. This youtube teaser with excerpts of Across the Rubicon might be worthwhile for you readers: