During the soundcheck, where I heard the new song Living in the Past- brilliant - it was time for our talk. I was glad the photographer stayed with me, because I was more nervous than I thought. The first thing he said to me though was: Nice pick, and by that he meant the plectrum I was wearing on my necklace that Id been given by Piotr Grudzinski (guitar) on a previous occasion. Gotta love that man ;-) After a little disruption and some stupid questions on my part (Why did you agree to do this interview?!) we got on to the serious stuff. It turned out there were no other magazines or websites interested in an interview. I found out later they didnt think there was anything new to talk about. Well, Id say a new EP with three beautiful songs is plenty enough for me, and we didnt even talk about that! 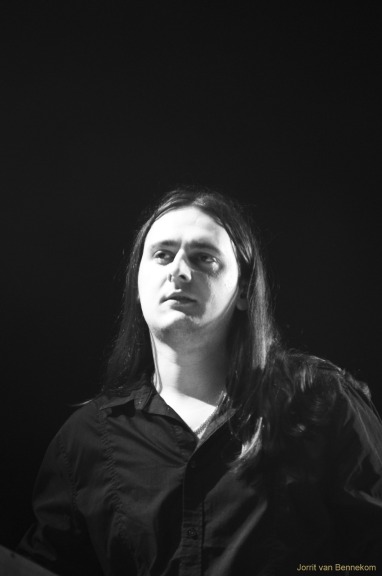 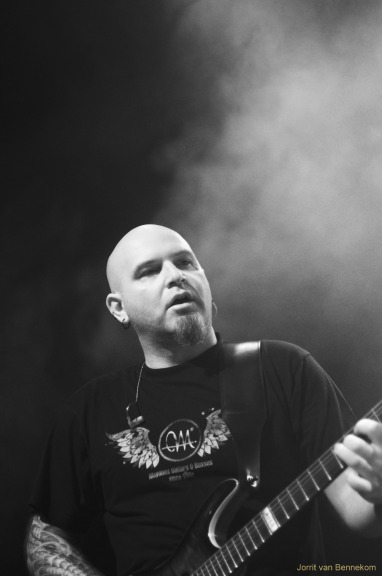 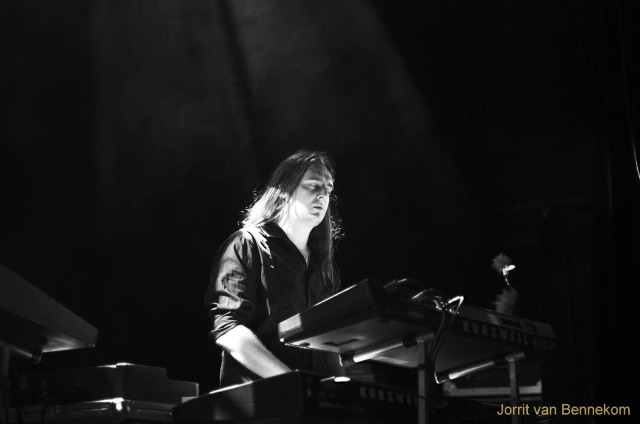 He started his career playing music at a young age. He played the piano when he was in the fourth grade of primary school. After that he took on keyboards and played in his first band. Not much later he had his first real rock band, or post-punk anyway, in which he played bass because, according to him, it was easier to carry about!

Since 2006, Mariusz and the other members of have been full-time musicians, making a living from what they do. Until that point, they all still had day jobs. Now they are what you call professional musicians and can connect their jobs with their passion. Mariuszs family support him a lot, because obviously his career takes up so much of his time. It always amazes him to see all the pictures hanging on the wall, reminding him of Jesus,  back at his mums in (deeply Catholic) Poland ;-))

I asked Mariusz how important it was for him to do a solo project, what his motivation was for that. I wanted to do something more often, he said. Riverside releases a new album every two years and he wanted to create something himself in the gap between.

Then I couldnt resist asking the question hes probably heard a million times before but I asked it anyway. How does he feel about the comparison to Steven Wilson? His first reaction was that it had probably something to do with the hair, the glasses and the fact that he doesnt look like a guy who goes to the gym! But after that he admitted that it may be connected to the music too, because after all, Porcupine Tree was an inspiration a long time ago. That influence must have remained in some way. He felt happy and honoured, he said. And so he should, if you look at where PT is now!

When I asked him if he had any idea why his career grew so fast, he laughed out loud. This is s 10th anniversary, so in his opinion it took a long time! Well, I agree, but from our point of view the band came into being when they started to play outside , which is now 5 years ago. He said he had no idea how hes go to where he is now, but was very happy with the fact that their shows always sell out nowadays. He mentioned that there are a lot of bigger bands, though, whose careers have progressed much faster.

Back to the music then, which is after all what it all boils down to. Riverside has just released the EP Memories In My Head with a total length of thirty minutes, containing three long songs. The whole of the album can be listened to as one piece as well. One song flows smoothly into the other, lyric wise and music wise. The title refers to the first EP Riverside released back in 2006, which was called Voices In My Head. It is the ending of a period in which Mariusz reverted to old themes. Initially, the EP was only available on tour, and now also in stores from June 20th.

Mariuszs next release will be of a bonus album from Lunatic Soul. K-Scope has the exclusive rights, and the album is called Impressions and will be out in October this year. Its not the third album of Lunatic Soul, but a bonus to the black & white albums. After that Mariusz and the guys will be back working on a new full-length album, which will be out sometime in 2012.

I asked whether hed consider touring with Lunatic Soul. He said it was very possible, but not soon. Maybe within two years. He would gather a nice bunch of people to join him, probably the guys who were recording the album. Or maybe their support act Tides from Nebula. So there will be a lot of movement on the stage, he said. (I must admit that I didnt know here if he was serious or not!)

Anybody who knows Riverside, knows that mental problems are a major theme in the lyrics - from schizophrenia through to ADHD and everything in between. Its all covered one way or another. I asked Mariusz where his fascination with these kind of problems comes from. He answered: From the amount of medicine I take! J But then he explained that he had always liked strange things; he loves to read books about it and watch movies related to the subject. He believes he keeps things at a safe distance though, with room for listeners own interpretations: Maybe next time I will go deeper, more twisted. He admitted that he finds it hard to write in English  but its always easier than writing in Dutch!

, its history and culture, has not been reflected in the lyrics or the music, according to Mariusz (or if it has he isnt aware of it yet). Of course the communist system left its mark  they always had that Big Brother watching every step! So now that they have the chance, Polish bands want to move on. Mariusz said that are the first real rock band to have played outside . Before it was mainly metal acts who spread their wings and tried to make a difference.

He had no idea why Polish people are so prog-minded, but maybe the above explains it all. Mariusz is happy with the progressive rock label, because to him it has two meanings. First of course is the genre of music that spawned the name. But progressive to him also means being open-minded, something new. He doesnt want to be called the band that does Pink Floyd covers, but rather the band that you listen to for ten seconds, and know straight away it is *that* band. A unique sound. He thinks they are are on the right way to finding that sound. 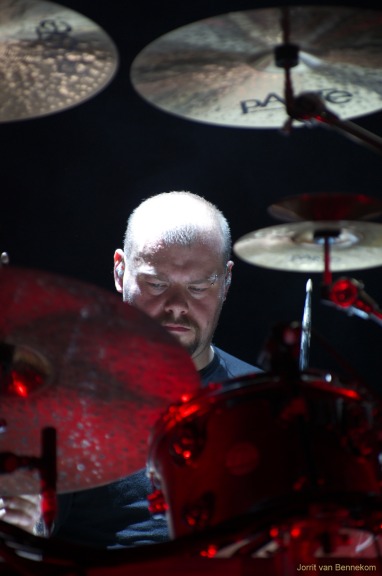 The audience in is more mature, Mariusz believes. They know what they like. In Poland its a lot more chaotic. They take what they can get, music-wise, and only later find out what they were listening to. In Holland people choose consciously, he believes. I think this is true - the Dutch progressive rock audience is a unique bunch of people too ;-)

What can we expect from Riverside in the future, apart from deeper lyrics? Mariusz says hed want to be at the same place in another ten years. That the band still exists and that they still play for the same amount of people. It would be great of course if the crowd was bigger, but it all depends on future records. Maybe its time to make something more commercial? he said, and there I knew he was just kidding - at least I hope he was!

It confused me as well, because my next question was: Will you still be playing small venues  even though youve become big? But I realised that from their point of view it is absolutely fantastic that they can. This year they will play in at a festival, the Polish version of , for 200,000 people. Its their first time for such a big crowd. Of course that will be a great experience and a highlight in our career. Its nice to jump a little higher form time to time, he said.

He is not a big fan of collaboration projects, of the kind weve seen so much of recently. He doesnt want to lose himself and forget where came from. I dont want to disappear, so it probably stops with and Lunatic Soul.

Finally, his motto in life is: Take a risk, from time to time. If you dont, youll never find out. I think its a good option for positive vibrations.

Well, he did, and it brought him here, to Hengelo and the next day at a sold out Boerderij, prog temple of the Netherlands. And yet he stays so modest! It was a great experience for me. I still had a thousand questions, wanted to know more about his childhood and about his lyrics and his passions. I wanted to dig deeper into the head of Mariusz Duda and find out about his mental condition. But it was okay. The magic stayed. His mum can be proud J


Back to Riverside on this site
or back to the index.