ANIMA MUNDI IN THE NETHERLANDS TO FINALIZE NEW ALBUM

Cuban prog-phenomena Anima Mundi strikes down in the Netherlands to finalize the long awaited successor of their succesfull The Way-album. The rumour has it that the band made some special recordings with a symphony orchestra in their homeland. It seems to be a rather ambitious project. Mostlypink had a quick chat with singer Carlos Sosa and guitaris Roberto Diaz to figure out where everbody is so curious about.

How was your trip to Europe?

Roberto: It was a wonderfull, but very long trip that lasted almost twenty hours!

Are you going to finish off the album in the Netherlands?

Roberto: Were finishing the recording process in the Netherlands. I dont have any idea where we finish the mix. I hope that the new album will be released in januari/february next year.

Carlos: The album will be released by ourself. We started our own label. In case of support or costs Musea Records didnt help us very much, you know. There earned a lot of money. We earned nothing. Roberto and Virginia are spending every minute of their life in Anima Mundi and arent receiving any financial compensation. Its a disgrace!

Roberto: I dont want to become a millionaire. I just wanna be a musician who gets decently paid.

Will the forthcoming album be equal to The Way?

Roberto: The new album will be related to The Way, but its moving forward to another directions. I really cant tell you concrete facts. Its a suprise, and so it will be for us, because the new album took so much time. You can even say it took its own life. The ideas were worked out step by step and went through constant changes. Making an album is easy, but its hard to make an album were youre pleased with.

Carlos: Weve got confidence in the new material, but it takes a lot of work to assemble it in the correct way. We try to make it sound like one big chunk of music.

According to the succes of The Way, are you feeling some kind of pressure to conquer a new level with a new album?

Roberto: I try not to think about that. Ideas just come up. I feel the music and play. Im too much busy with rehearsing and recording. 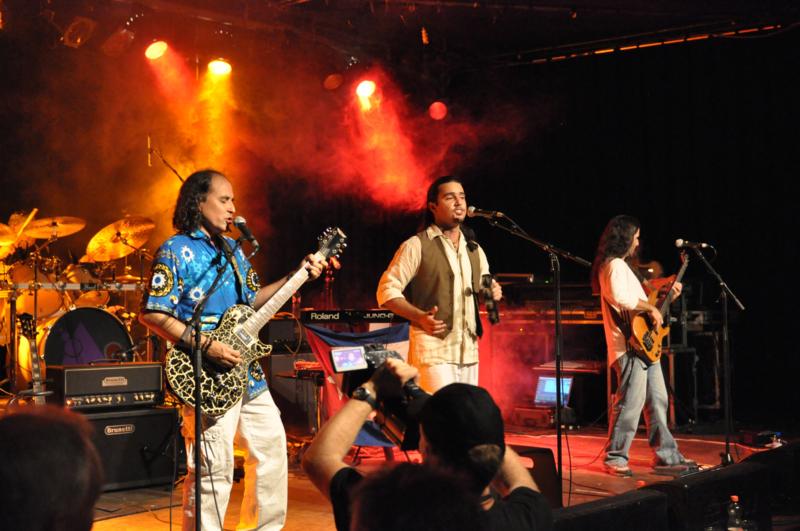 Had all the bandmembers their compositional contributions?

Roberto: Most of the material is composed by Virginia Peraza (keyboards) and myself. Ideas from the other bandmembers are incorporated into the songs. It was a very difficult year to put all these ideas together.

Carlos: I set my mind to it that my all of my ideas are worked out in the new album. I hope that I wont be dissapointed. Ha!Ha!Ha!

Is it true that Anima Mundi did some special recordings with an orchestra for the new album?

Roberto: There were severall parts arranged for an orchestra. Unfortunatly, it was impossible to record them,  because there was no money left for it. We were involved in a project with a symphony orchestra in Cuba, but the record-company claimed all the rights. We were left with nothing.

Carlos: In Cuba we dont get any economic support. Getting or earning some money for your project is very hard.

Thank you very much for your time and answers, Roberto and Carlos,

A great review in Dutch at " www.progwereld.org/.


Back to; Anima Mundi.
Live Dates.