Mostly Autumn on tour in the LowLands 2004.
They did perform a small Pink Floyd set at the LowLandstour 2004.
If you want to see more pictures of the latest shows in the U.K. and the LowLands tour visit the Dutch Mostly Autumn site or
ProgNose our Belgium friends.

It was high time on the Dutch highways, so we arrived late in Tilburg. Just enough time to have a quick joyful meal at the Mexican, thanks Heather for the recommendation ;-)
While we were eating, the whole band and the most dedicated MA-fans from the LowLands passed the window...
So we payed the bill and went to the small hall in 013. Novastar was playing in the big hall, MA should play there next year and I think they must be able to get a full house there too. About the abilities of this band I'm convinced that they'll play in football stadiums... one day.
When you've visit MA 7 times in the LowLands, it's always good to see the same faces and friends again. But there were many new visitors and that is a good sign.

A few minutes past 09:00 hours Ian started with a Floydian intro and indeed the first tunes of Echoes revererated through the hall. A classic Pink Floyd song that was performed excellent, pictures of the Pompeij-video flashed in my head... Liam the second guitarist took over some nice guitar loops and sequences.
WYWH was sung by the whole 350 people in the hall I believe... followed up by a really good version of Comfortably Numb with another compliment for Liam; he did the vocals parts with Bryan. Think Liam was for a longtime the underrated second guitarist of this band, but he showed, again, that he isn't.
So the Floydian set was a nice intro from the band to start with their own songs. Do they need this Pink Floyd set to prove what they can? No absolutely not, some of their own songs are equal to the high standard Pink Floyd has achieved in the last 40 years. One of the highlights was the next song; Distant Train from their last album. During the V-shows they had a round projection-screen with stylish pictures and movies. It was a shame that the record-company didn't make this possible for the LowLands tour.
Finally it was time for Heather to step into the stage and a warm applause did welcome her. And indeed a nice hairstyle ;-)
Angela was standing a bit to far at the back, but she was wonderful on her flute.
A lot of the Passengers album was played, Bryan tried to explain how mysterious the songs were, but it all became more mysteriously. Of course the highlights of the first two albums were set down, sometimes in slightly different setup as we're used too; nice!
A few lines of a Fleedwoodmac's song Rhiannon were the intro of one of their own songs and was real surprising (Heather is a big fan of Fleedwoodmac).
Hanneke announced that there was time to rock and the band did ROCK. Of course there was time to celebrate with a Celtic song; At the Inn.
Andy was standing on the back, normally he walks arround the stage and does some back-rubbing with Heather. But his un-usseal riffs were there and that is more important. Andrew, just a few months in this band, did a fantastic job behind his drum-kit. It seemed he was in the band for years, but probably his brother Ian, the magicien with his tricky solo's and tasty keyboards, raised him with MA-stuff.
Of course Heroes Never Die was a moment of reflection ("The ways the ins and outs of heaven still elude us to the end The tears, the sun and rain, I feel them on my face and on my skin We loved you then, we love you still and don't you know...Heroes never die"...).
Heartlive was a new song and if that is the standard of the upcomming album Storms Over Still Water then that new album becomes a stomper.
When it is X-mas time they have the tradition to play a X-mas song, this time no "Father X-mas" of Keith Emmerson, but surprisingly the Pogues/Kirsty Macoll with "Fairytale of New York". Heather and Bryan in well performed funny duet, yes they form a good couple.
There was time for jokes and some teasing and that was fun to watch.
The show ended with Mother Nature, the epic of epics with a resprise of the tunes of Echoes ... excellent version, the best I ever heard!
The sound in 013 was very excellent, crystal sounds, great venue for Quality Music. A big applause for the sound engineer as well!
This Lowland tour has proved that the band has grown again during the past year. A special remark I want to make about Heather's voice and performance: she dares to use her voice to the max now, with a wider and more powerful range and her friendly charisma has reached the level of a symphatetic leadsinger with that kind of friendly Brittish humor and ability to interact and flirt with the audience (and Bryan).
Think the 350 visitors had a wonderful time and MA has some new fans...

For me it was the best act of this year, even without the projections, followed by Steve Hackett's gig at the famous Spirit of 66.

PS Sadly Jean (mother of Bryan Josh) and Troy Donockly stayed in the U.K./ Japan. It was always nice to have a small chat with Jean, but her replacement was also good looking. And Troy; Cheers see you next time! Hope you a good time too with Dave in Japan.
Nick of the lovely South of the Netherlands,
Friday 17 December 2004.
MA at PinkPop?

I wish you all a wonderful X-mas time and all the best for 2005; keep proggin'!

Picture by Wilma Hoogendoorn,
Zoetermeer 17 December 2004.
More at: http://www.xs4all.nl/~thissius/Hammerheads/index2.html.
Note: Kristy lost her life in tragical diving
accident in the Gulf of Mexico (2001).
It was Christmas Eve babe
In the drunk tank
An old man said to me, won't see another one
And then he sang a song
The Rare Old Mountain Dew
I turned my face away
And dreamed about you
Got on a lucky one
Came in eighteen to one
I've got a feeling
This year's for me and you
So happy Christmas
I love you baby
I can see a better time
When all our dreams come true

You were handsome
You were pretty
Queen of New York City
When the band finished playing
They howled out for more
Sinatra was swinging,
All the drunks they were singing 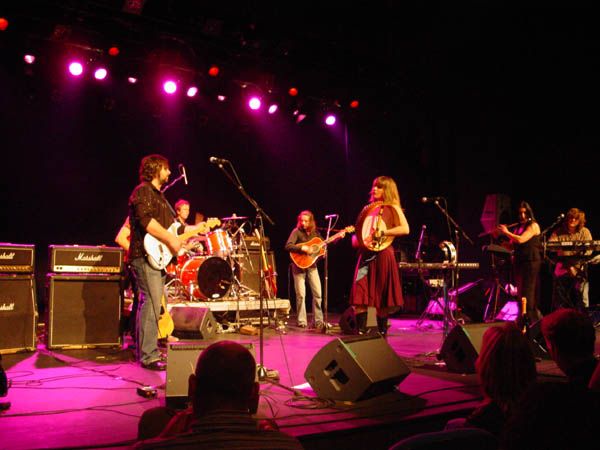 We kissed on a corner
Then danced through the night

You're a bum
You're a punk
You're an old slut on junk
Lying there almost dead on a drip in that bed
You scumbag, you maggot
You cheap lousy faggot
Happy Christmas your arse
I pray God it's our last

As intro there was music of Sigor Ross, I know that it's the favorite music of Bryan and Troy.

Think the list complete, maybe the sequence is not right.

Wish You Were Here

Caught in a Fold (Passengers)

The Dark before the Dawn (The Last Bright Light)

Evergreen (The Spirit of Autumn past)

Last Climb (The spirit of Autumn past)

Heroes Never die (For all we shared)

Something in between (Passengers)

Nowhere to hide (close my Eyes) (For all we shared)

In Antwerpen "Money" was played as extra Pink Floyd song.

The gig in Zoetermeer lasted more as 3 hours, de Boerderij is one of their habitats in the LowLands with a great amount of older fans.
"Merry Christmas Everybody" of Slade and "I Believe In Father Christmas" of Keith Emmerson (this is a real MA X-mas song) were played as bonus.

More Pictures of the awesome Mostly Floyd DVD.
Please take a look at the pages with wonderful shots of various shows and you'll agree with me that the next time the LowLands must get a fully loaded laserbeam-projection-screen with quadrophonic sound show too. 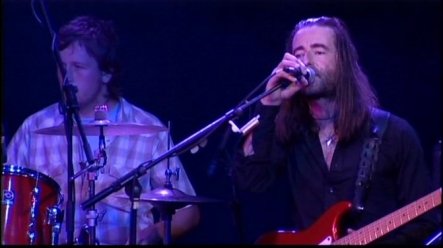 Maybe if you vote at the PinkPop site on Mostly Autumn, we'll get it done!
Good luck!

And by the way, yes you can have a laugh when you want, my votes went to:

Yes the old-racing driver told that he wants to tour again under the flag of Pink Floyd. But he also said that it was unlikely because David doesn't wants.
So Nick ask Bryan, you got his adress I believe and join forces!


See my news page about the interview with Nick Mason.


For all who we've lost, where ever they are.
Thanks to the whole band for performing it so well... 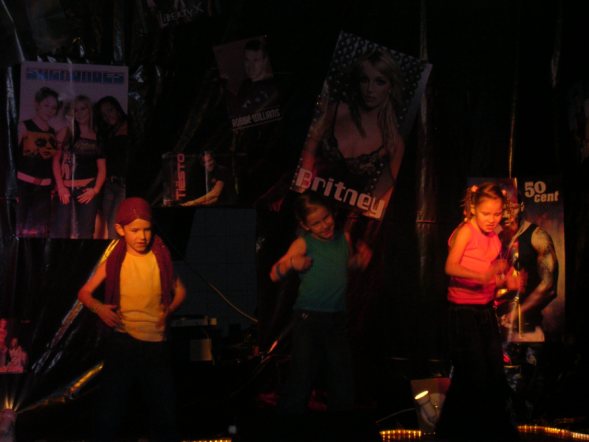 Please be so free and sign my guestbook.
The official home page you'll find here: www.mostly-autumn.com.

This is the Dutch Mostly Autumn site a wonderful site of Louis & Thijs, with excellent pictures and reviews and interviews (in Dutch).

or for a review and pictures of the gig in Antwerpen:

ProgNose our Belgium friends. Will be placed this week.

Updated Sunday the 18th December 2004,
with dots, comma's and Pictures of Wilma and Thijs, thanks!
Nick.
www.mostlypink.net