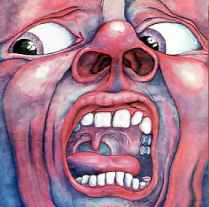 
This legandery album is followed by In the Lake of Poseidon ('70) and Lizard ('71). Mel Collins joined the group shortly. Greg Lake leaves the band to set up a band with Keith Emmerson and David Palmer. Island is another album ('72).

Lark's Tongues in Aspic ('73) is with David Muir on percussion and the same guys on the next albums; Starless and Bible Back & Red ('75):


Robert dissabanded the band and started to work with Brian Eno. After a few try outs they started under the flag of The Disciplines, but soon they put the tag King Crimson on it:
Discipline ('81) & Three of a perfect Pair ('84):

They made more albums then i can handle, one of their latest efforts is called The Power to believe, ('03), with;

The following news came from Sid Smith of DGM Live: The band will be playing a series of live dates in Chicagos Park West  most recently the venue to RF and the LoCG appearance in the windy city. Fripp notes Park West is a fave venue, and one I have been working for 27 years. The LCG were here in 1989 & 1990... This is also the venue where, according to our current plans for King Crimsons return to active-service in 2008, preparatory to the 40th. Anniversary Celebration of 2009, The Beast Of Crim will be playing a 4-night residency in August 2008 with KCs third double-drumming formation.


A fourth double-drumming formation, of 1981-84 (Adrian & Billy B), doesnt quite count as Adrians primary focus was in the front line.

Harrison is one of the most respected drummers of his generation, adding a prodigious technique to the work of Porcupine Tree as well collaborating with Jakko Jakszyk on The Bruised Romantic Glee Club, and most recently, Drop  an album with bassist and singer, 05Ric and also featuring contributions from Fripp. Some may recall Drop was featured as a DGMLive giveaway (see my review on the blog), perhaps hinting at Harrison's proposed involvement. Only DGMLive regular, Chocolatefireguard, spotted the listing on King Crimson's myspace site: the top four musicians have been there for a couple of months now.

Session for/ worked with:

Michel Giles ('70),
T-rex,
Wolf - Canyus Lupus ('73),
Foreigner ('77 - '79),
Double Vision,
Fireballet,
Steve Taylor ('85),
Steve Kackett - the Tokyo Tapes ('98.
FRIPP, ROBERT.
Born 9 May '56 Wimbourne, Dorset. Keybaords, guitar, fripperonics, producer.
After the split up of King Crimson ('74) he goes in therapy an after a year he made some solo-albums with Brian Eno (two records with help from David Bowie, Blondie & The Roches). He performs at record-shops and street corners with his Fripperonics.

Together with Bill Bruford, Tony Levin & Adrian Belew they perform live as the Disciplines.
With Andy Summers: I Advance Mask ('82) & Bewitched ('84). In the meantime he married Toyah Willcox and becomes her producer.
Another solo-album is Robert Fripp & the League of crafty Guitarist ('91).
Together with David Sylvian: The First Day ('93).
Followed up by Damage ('94). With Terry Marotta- drums & Terry Gunn- rythm sticks.