The venue was filled with 250 people, so it was almost sold out in the fantastic Spirit of 66. Think that the most of the visitors were Porcupine Tree fans and that isn't so strange...


The keyboard wizard Richard Barbieri supported Blackfield with a few songs of his solo cd Things Buried. Dynamic and atmospherical tunes, a lot of Ashra Temple and Tangerine Dream. He got a warm applause for that and that was deserved.

The show started impressive with the song "Blackfield". And all the good things of Blackfield was in there: good riff, catchy melodies, harmonies, piano, carried by a rhythm guitar and of course an nice aggressive lead guitar.
The second song was "The Hole in Me", with that nice keyboard tune which reminds me of the wonderful "Golden Brown" of the Stranglers.
The progressive pop-songs were played as they sound on the album, although "Were is my Love" (one of the bonus-tracks) was played in a slightly different version.
The crowed was delighted to hear "Waiting" and "Feel so low" aswel.
Steve did the major vocals, Aviv did the lead on "The Hole in Me" and "Pain".
According to Steve, Aviv was one of the famous rock stars in Israel. And he wrote "Cloudy Now", originally a hit for Avi, sung in Hebrew. It was one of the highlights of the evening, and again a song with a big counterpoint, it starts like a ballad and then there is that angry end.
Steve wasn't in for much jokes and stories, maybe that had give the gig some extra flair.
Appenrently the band liked it and wanted to play some more songs. But there is only one short Blackfield album, so "Pain" and "Blackfield" were played again.
Aviv promised that they would return, think they'll fill the Spirit twice by then...

It was nice to see my gig-friends again and see that they had a wonderful evening.
Hope Steve didn't got cold feet.


More excellent pictures at www.ifrance.com/ from Vincent and 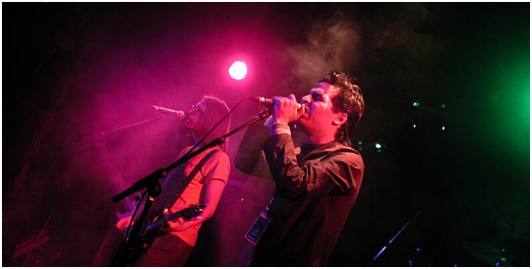 More shows to be confirmed soon.


Back to: Blackfield or
Porcupine Tree.