A band formed in 1984 by Rob Reed ( Magenta). When Rob met Clive Nolan an album called "For King & Country" ('93) was made. Rob playing on all the instruments! More albums followed with Christina Murphy (see Magenta) on backing vocals.

The next album is called Pictures From The Other Side. The line-upp is the same as on:

Remastered ('97) features nine classic tracks taken from the first two, now deleted Cyan CD's 'For King & Country' and 'Pictures From The Other Side', both originally released on the Dutch SI label. 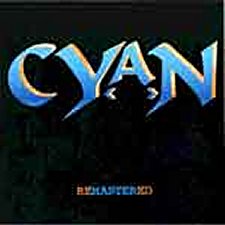 A few tracks were remastered, all the tracks were written by Rob Reed, lyrics by Rob, Steve Reed, Andy Edwards and Nigel Voyle. Nigel voyles voice has some likeness with Peter Nichols /IQ.
"Call me" is an instrumental song that is used (in a different way) on the single "Broken" of Magenta. It contains also the new 2005 hit All around the World!
Really nice album in the "symphonic" style of the late 80-ies end early 90-ies, like bands as IQ, Landmarq and other. Not very progressive but very listenable. Certainly the last tracks with Christina are worthed to spent some time at.

A really nice proggy album, listen to "the River" and you hear indeed a pre-Magenta. Most of the songs were written by Rob and his brother Steve.
Echoes ('99) was the last album Cyan recorded.

Nigel Voyle is involved with ProgAID (2005)

See at the Magenta pages how this band has evolved.